It’s the season of heat, sunshine, and unfortunately, sun burns. Here’s what to watch for when it comes to skin cancer.

What’s the Difference Between a Mole and a Melanoma?

Mole: Clusters of pigment-containing cells (melanocytes), usually harmless.
Melanoma: The least common, but most dangerous kind of skin cancer that can arise on its own or in pre-existing moles.

What Should I Watch Out For?

A new mole has popped up. Should you be worried? New, harmless moles actually appear all the time before the age of 25, so a new mole isn’t automatically a dangerous thing. 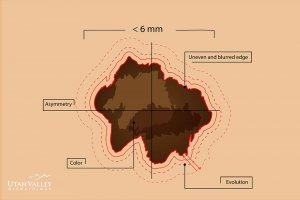 What should cause you to consider having the mole checked out is if it is changing; becoming darker, grow rapidly, change color, shape, or border. Typically it is a changing dark flat mole that is enlarging that could be concerning. Sometimes moles that used to be flat become raised. In other cases, moles begin to bleed, itch, or scale. These signs should send you to the dermatologist right away.

Melanomas can be hard to spot and if you see anything suspicious, come in and see Dr. Myers or another Dermatologist.

What Areas Are Most At Risk For Other Skin Cancers?

Certain areas of the skin are often exposed to the sun without protection. These areas include the tips of your ears, and areas around the eyes. Basal cell cancers, which are the most common and the least destructive of the skin cancers, often appear in those areas such as the face or sun exposed arms or upper back. (near the eyes, and sides of the nose). Squamous cell cancers are also common but less common than basal cell carcinomas. They also arise on sun exposed areas such as the face and even ears and lips. Basal cell or Squamous cell cancers often start as a non healing sore.

Who Is Most At Risk For Melanoma?

Anyone can get skin cancers. However, people most at risk of getting melanoma have these traits:

If this describes you, don’t get burned, and do skin checks a couple times a year by yourself or with the help of a significant other.

How Can I Prevent UV Damage As I Travel?

As families head out on trips, it’s important to take the right precautions against sun damage. Sunburn in childhood is a risk factor for skin cancer later in life, so wear hats and protect babies and children against sunburn.

Midday, higher altitude, and being near to the equator should lead to taking more precaution. Lastly, remember that sunscreen usually takes about 15 minutes to be absorbed into the skin. Remember to reapply often if swimming or sweating.